Flurry of Proposed New Rules from the SEC—Key Takeaways
4.7.2022

During the first quarter of 2022, the Securities and Exchange Commission issued a flurry of proposed new rules and rule amendments. While the proposed rules on the enhancement and standardization of climate-related disclosures and cybersecurity risk management, strategy, governance and incident disclosure have garnered plenty of headlines and attention, the Commission has proposed significant rule changes in other areas which, if adopted, will impact public companies. Importantly, the Commission proposed amendments to beneficial ownership reporting requirements for Schedule 13D and Schedule 13G filers, including aggressive acceleration of filing deadlines which could affect activist campaigns. The Commission also proposed new rules for disclosures of projections applicable to SPACs and all reporting companies, and re-opened the comment period for the proposed pay-vs-performance rules contemplated by the Dodd-Frank Wall Street Reform and Consumer Protection Act. In addition, the Commission proposed new rules under the Investment Advisers Act of 1940 applicable to private funds. It is critical that reporting companies assess the potential impacts of these proposed new rules and rule amendments on their controls, reporting processes and public disclosures.

On February 10, 2022, the Commission proposed amendments to rules that govern beneficial ownership reporting requirements applicable to persons who own 5% or more of a class of public company stock. The proposed rules attempt to modernize reporting requirements for initial and amended beneficial ownership reports filed on Schedules 13D and 13G with the goal of providing more timely and complete information to investors.

The proposed rules would:

Under the current reporting regime, a Schedule 13D must be filed within ten days after acquiring beneficial ownership of more than five percent of a class of registered voting securities and must then promptly file an amendment to report any material changes.  The proposed rules would shorten the initial deadline to five days and require amendments be filed within one business day of any material change in previously reported beneficial ownership, rather than the existing requirement to amend “promptly” which has not been defined. The purpose of these changes is to account for the delay in reporting material information that may contribute to information asymmetries that may impact share prices and could potentially harm investors.

Of note, to accommodate the abbreviated filing timelines, the proposed amendments include extensions of the filing cut-off times for all Schedule 13D and Schedule 13G filings from 5:30 p.m. ET to 10:00 p.m. ET.

Below is a table summarizing the proposed changes to Schedules 13D and 13G. 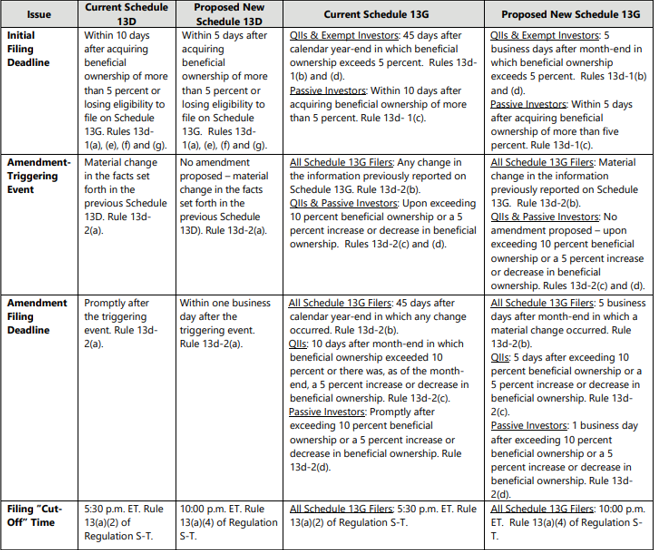 Proposed Rule 13d-3(e)(1) would provide that a holder of certain cash settled derivative securities, other than a security based swap, will be deemed a beneficial owner of the reference securities in a covered class if such person holds the derivative security with the purpose or effect of changing or influencing the control of the issuer of such class of equity securities, or in connection with or as a participant in any transaction having such purpose or effect.  This may cause certain holders to become five percent beneficial owners subject to Schedule 13D/G reporting and/or ten percent beneficial owners subject to Section 16.

The proposed changes would also revise Item 6 of Schedule 13D to clarify disclosure requirements with respect to derivative securities held by a person reporting on that Schedule.  The proposed revisions to Item 6 would expressly state that the use of derivative instruments, including cash-settled derivative securities which use the issuer’s equity securities as a reference security, are included among the types of contracts, arrangements, understandings and relationships that must be disclosed.

Clarifications on What Constitutes a Group

The Commission is also proposing a rule change to better align the text of Rule 13d-5, as applicable to two or more persons who act as a group, with the statutory language in Sections 13(d)(3) and (g)(3) of the Exchange Act.  Sections 13(d)(3) and 13(g)(3) of the Exchange Act and Rule 13d-5 under the Exchange Act provide that two or more persons or entities beneficially owning shares of registered securities may be deemed to have formed a “group,” which acts as a “person” for purposes of beneficial ownership reporting.

The proposed changes intend to remove any implication that an express agreement by two parties to act together is a requirement for formation of a group.  Many courts have determined that an agreement among group members to act together is a prerequisite to a finding that there is a group.  The proposed rule clarifies that forming a group does not require an agreement.  In addition, the proposed rule would contain language to address circumstances in which two or more persons act as a group under Section 13(g)(3) and the group is deemed to become the beneficial owner of all of the equity securities of a covered class beneficially owned by each of the group’s members as of the date on which the group is formed.

The proposed changes attempt to clarify circumstances under which two or more persons have formed a “group”.  This includes, among other things, tipper-tippee relationships in which a person shares nonpublic information about an upcoming Schedule 13D filing with another person who then purchases the issuer’s securities based on such information.

The proposed rules would provide for new exemptions to permit such persons to communicate and consult with each other, jointly engage issuers and execute certain transactions without being subject to regulations as a group provided such activities are done without the purpose or effect of influencing control of the issuer.

Lastly, the Commission proposed structured data requirements for Schedules 13D and 13G. The proposed rule would require that beneficial ownership reports on Schedule 13D and 13G be filed using a structured, machine-readable data language.    The Commission believes that a structured data requirement would greatly improve the accessibility and usability of the disclosures, allowing investors to access, aggregate and analyze the reported information in a much more timely and efficient manner.

The public comment period remains open until the later of 30 days following publication of the proposing release in the Federal Register and April 11, 2022.

The full proposed rules can be found here.

On March 30, 2022, the Commission proposed rules that would impose a wide range of new requirements on special purpose acquisition companies (SPACs) for initial public offerings and business combinations with private operating companies (aka, de-SPAC transactions). As a way to address the SEC’s concern over the integrity of projections used in connection with de-SPAC transactions, the proposed rules amend Item 10(b) of Regulation S-K. The proposed amendments to Item 10(b), which would apply generally to all issuers, would require, among other things, that any projected measures not based on either financial results or operational history must be clearly distinguished from those that are based on financial results and operational history. Additionally, projections based on historical measures and operating history would need to be presented with equal or greater prominence than their counterparts not based on financial results or operating history. For projections based on a non-GAAP measure, the proposed amendments would state that the presentation should include a clear definition or explanation of the non-GAAP measure, a description of the most closely related GAAP measure and an explanation why the non-GAAP measure was selected instead of a GAAP measure.

The public comment period ends on the later of May 31, 2022 and 30 days following the publication of the proposing release in the Federal Register.

The proposed rule can be found here.

Reopening of Comment Period for Pay vs. Performance Disclosures

On January 27, 2022, the Commission signaled its renewed interest in its pay-versus-performance disclosure rule by reopening a 30-day comment period on rules requiring registrants to disclose how executive compensation actually paid by a registrant relates to the financial performance of that company. Interested parties could submit comments on both the original proposals and the 22 new questions raised by the staff. The new questions suggest several potential additional requirements under consideration, including expanding the performance measurers to be disclosed in relation to executive compensation. In reopening the comment period, the Commission observed that there have been significant developments in executive compensation practices as related to company performance since the proposed rule was originally issued in 2015.

Section 14(i) of the Exchange Act was added in 2010 by the Dodd-Frank Wall Street Reform and Consumer Protection Act (“Dodd-Frank”) that directed the Commission to adopt rules requiring registrants to disclose in its proxy statement the relationship between named executive officers’ “actual” pay and the financial performance of the registrant. In 2015, the Commission issued proposed rules that would add a new section to Item 402 of Regulation S-K requiring registrants to disclose the following information in a new table for each of the most recent five years:

In reopening the comment period and by identifying 22 new questions to respond to, Chair Gensler stated that the Commission is “considering whether additional performance metrics would better reflect Congress’s intention in the Dodd-Frank Act that would provide shareholders with information they need to evaluate a company’s executive compensation policies.” Chair Gensler stated that he believes, if adopted, the rule would strengthen transparency and the quality of disclosures related to executive compensation.

To view the SEC’s release and the additional 22 questions, see here.

On February 9, 2022 the Commission included in its regulatory agenda several proposed rules which would significantly affect the operation of private funds. The proposed rules under the Investment Advisers Act of 1940 would include new requirements for investor quarterly statements, adviser led secondaries, private fund audits, side letter practices and annual reviews, and the prohibition of certain activities. Of note, some of the proposed rules would also apply to investment advisers who are not registered with the Commission such as capital fund advisers, smaller private fund advisers and many non-US advisers.

The proposed rules would:

Given that many of these proposed rules would represent a significant change from long standing practice, it is expected that private fund advisers and other industry participants will be highly engaged during the public comment period.  If the proposed rules are adopted, the Commission is proposing a one year transition period for advisers to come into compliance.

The proposed rules can be found here.

Below are links to first quarter 2022 corporate and securities law publications and blogs posted on kmklaw.com.