During the fourth quarter of 2022, the Securities and Exchange Commission continued its brisk pace of rulemaking across several disclosure initiatives. The Commission reopened the comment period for its share repurchase disclosure proposal, established compliance deadlines for the new compensation recovery rules, updated compliance dates for the Nasdaq board diversity rules, issued new and updated compliance and disclosure interpretations (CDIs) for non-GAAP measure disclosures, issued CDIs for the new universal proxy rules, and posted a sample comment letter regarding developments in crypto markets.

The Commission also secured a record $6.5 million penalty in a textbook Regulation FD action which provides a cautionary tale for executives who communicate with analysts around the time of earnings reports.

Finally, we included a summary of recent ISS policy updates, an update on where other Commission rule proposals are in the comment and rulemaking process, and links to our fourth quarter advisories reporting the Commission’s new insider trading rules and compensation recovery rules.

On December 7, 2022, the Commission reopened (again) the comment period on proposed amendments intended to modernize and improve the disclosure required about an issuer’s repurchases (or buybacks) of its equity securities. Recall that under proposed amendments, the SEC would: (i) require daily repurchase disclosure on a new Form SR, which would be furnished to the SEC one business day after execution of a company’s share repurchase order; (ii) require additional detail regarding the structure of a company’s repurchase program and its share repurchases; and (iii) require information disclosed pursuant to the new rules and Form SR to be reported using Inline XBRL.

The Commission’s announcement related to the proposal notes: “The Commission is reopening the comment period because, after the proposed amendments were published for public comment, The Inflation Reduction Act of 2022 was enacted. The law imposes upon certain corporations a non-deductible excise tax equal to one percent of the fair market value of any stock of the corporation repurchased by such corporation during the taxable year. As a result, the Commission staff has prepared a memorandum that discusses potential economic effects of the new excise tax that may be helpful in evaluating the proposed amendments.”

The amendments were initially proposed by the Commission in December 2021, and the comment period for the proposal was reopened in October 2022.

The Commission published its final clawback rule in the Federal Register on November 28, 2022, which establishes the following deadlines:

On December 14, 2022, the Commission posted a notice for an immediately effective change to Nasdaq’s “disclose or comply” board diversity rule. Because it was one year after the original approval date of the rule, August 8, 2022 was set as the initial compliance deadline for board matrix disclosures under this rule, and all of the other compliance deadlines in the rule were keyed to that anniversary date. Nasdaq is attempting to simplify the timeframe for disclosures made outside of the proxy statement.

This rule change is immediately effective, although the Commission may temporarily suspend it if it determines that it is necessary to do so.

On December 13, 2022, the Division of Corporation Finance issued seven Non-GAAP Financial Measures CDIs. Several of these CDIs update or replace the language of existing CDIs, while the remainder are new. The CDIs address circumstances when certain measures and adjustments are deemed to be misleading, among other disclosures.

On December 6, 2022, Commission staff published three new Proxy Rules and Schedule 14A Compliance and Disclosure Interpretations addressing the new universal proxy rules. Two of the new CDIs deal with the company’s obligations when a dissident shareholder’s nominees are rejected based on advance notice bylaw requirements, and one of the CDIs makes the point that a dissident must provide its own proxy card as part of its meaningful solicitation efforts and not just rely on the company’s proxy card.

We addressed the new universal proxy rules in our Third Quarter Snapshot.

On December 8, 2022, the Division of Corporation Finance posted a new sample comment letter addressing recent developments in the crypto markets which notes:

“Recent bankruptcies and financial distress among crypto asset market participants have caused widespread disruption in those markets. Companies may have disclosure obligations under the federal securities laws related to the direct or indirect impact that these events and collateral events have had or may have on their business. The Division of Corporation Finance believes that companies should evaluate their disclosures with a view towards providing investors with specific, tailored disclosure about market events and conditions, the company’s situation in relation to those events and conditions, and the potential impact on investors. Companies with ongoing reporting obligations should consider whether their existing disclosures should be updated.”

The sample comments focus on a company’s business description, MD&A and risk factors and address a number of topics, including:

On December 6, 2022, AT&T agreed to pay $6.25 million as part of a settlement with the Commission in connection with Regulation FD violation allegations. This is the largest penalty ever in a Regulation FD case.  The three company executives who were named in the lawsuit also agreed to pay $25,000 each for their part in the alleged MNPI disclosures.

The settlement follows a September 8, 2022 ruling from a federal court in the Southern District of New York denying cross-motions for summary judgment in the case brought by the Commission against AT&T and three individuals who worked in the company’s investor relations department alleging Regulation FD violations. The case provides a cautionary tale, especially to executives who engage with analysts on calls before the release of quarterly earnings. Calls to analysts before quarterly earnings are risky. Calls immediately following earnings calls that point to public results should remain relatively low risk. The further into a quarter conversations with analysts take place, the more risky those conversations may be. The facts of this case are worth noting for any public company executive who communicates with analysts.

AT&T failed to meet analysts’ consensus updates in 2015 for both Q3 and Q4. In the months leading up to the Q1 2016 results announcement, executives were sensitive to avoiding missed revenue for the third quarter in a row. Consequently, there was a concerted effort to “walk down analysts’ estimates” for that quarter in internal documents and emails.

Most of AT&T’s revenue was derived primarily from providing services, rather than equipment upgrades which did not have much impact on the bottom line. Although equipment upgrades accounted for only a small percentage of revenue, a steep decline in smartphone sales and customer reluctance in upgrading to new phone versions added to AT&T’s concerns about missing its earnings forecast. AT&T considered highlighting this concern by issuing a Form 8-K in early March 2016 that would have indicated wireless sales were down, but decided against it. Instead, the CFO discussed the issue at a scheduled investor conference in early March and strongly suggested analysts reduce their projections. The CFO did not provide any quantitative guidance for Q1 2016.

After the investor conference, when analysts did not reduce their projections, AT&T reached out to the analysts through private calls where they provided specific data points with metrics documenting the downward trend. After the calls, analysts reduced their estimates. When AT&T announced financial results, the results beat consensus revenue by less than 1%.

The court determined the information conveyed to analysts was material. AT&T argued that the upgrade rate and equipment revenue metrics were quantitatively insignificant because the information shared with analysts would impact revenue by less than 5%. Additionally, AT&T argued that although earnings results were material, total revenue was not material because of the inconsistent impact on earnings.

The court disagreed and found the information disclosed to analysts was overwhelmingly material, despite the minor effect this information had on earnings, because it enabled AT&T to meet and exceed analysts’ consensus expectations for Q1 2016. The court focused on the emphasis AT&T placed on these metrics in its prior public statements about this information, as well as the records demonstrating internal concern surrounding missing analysts’ expectations due to these metrics. Additionally, after phone calls with AT&T employees and the disclosure of these metrics, analysts adjusted their estimates.

The court also found the information the defendants disclosed to be overwhelmingly nonpublic. AT&T did not dispute that the values of the metrics themselves were not publically available, but argued both investors and analysts, using public information, could extrapolate much of the information. The court disagreed and found the evidence does not reflect that any analysts performed this analysis or reached this result.

Following are highlights from ISS’s updates to its benchmark voting polices that will be effective for the 2023 proxy season: 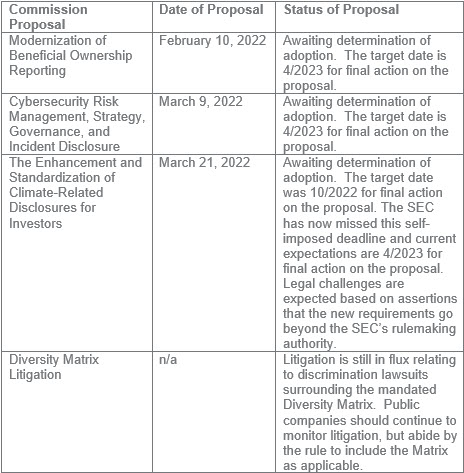 To see all proposed rules for 2022 see here.

To see all final rules implemented in 2022 see here.

Below is a link to our third quarter 2022 Corporate and Securities Law publications and blogs posted on kmklaw.com.