Securities Snapshot: 3rd Quarter - All About the Proxy

During the third quarter of 2022, the SEC amended rules governing proxy voting advice, proposed amendments to shareholder proposal regulation, and adopted its long-awaited final pay versus performance disclosure rules (a separate summary of which can be found here). The new universal proxy rules for director elections also became effective this quarter and we have included a reminder about the impact of those rule amendments and recent SEC interpretive guidance for companies. Finally, we have included an update on where other SEC rule proposals are in the comment and rulemaking process.

On July 13, 2022, the SEC amended proxy solicitation rules governing voting advice by proxy advisory firms (i.e., ISS, Glass Lewis and others). The amendments rescind portions of rules adopted by the SEC in 2020 which increased regulation of proxy advisors after public companies expressed concerns regarding the timeliness and independence of proxy advisor advice.

The amendments remove the requirement that proxy advisory firms claiming an exemption from proxy filing rules must (i) provide their voting advice to subject companies and (ii) provide their clients with company responses to their advice. The SEC also voted to delete Note (e) to Rule 14a-9 from the proxy rules which sets forth specific examples of what may, depending on the particular facts and circumstances, be considered misleading to investors with respect to voting advice. The amendments reiterate that proxy advisory firms are not liable for statements of opinion and that voting advice requires subjective determinations and exercise of professional judgment.

Rule 14a-2(9)(b)(ii) previously required proxy advisory firms to adopt and publicly disclose certain written policies and procedures and was intended to benefit shareholders in making more informed decisions. The amendments remove Rule 14a-2(b)(9)(ii) as the SEC reached the conclusion that since the enactment of the 2020 rule, investors had expressed concern about the rule’s impact on the cost, timeliness, and transparency of the voting process, and that ultimately the benefits of the rule did not outweigh the costs.  While the amendments rescind portions of Rule 14a-2(b)(9), some parts of the rule remain in place, including the conflicts of interest disclosure requirements.

The 2020 rule added Note (e) to Rule 14a-9, which provided that failing to disclose material information regarding voting advice, such as a private advisory firm’s methodology, sources of information, or conflicts of interest, may be misleading. The SEC concluded that Note (e) could cause greater confusion because voting advice poses heightened concerns and should be treated differently than other types of solicitations under Rule 14a-9. Additionally, the SEC now reasons that identifying a proxy advisory firm’s methodology, sources of information, and conflicts of interest as examples of material information could suggest proxy advisory firms have a unique obligation to disclose that information. Because of this potential confusion and its potential ramifications, the SEC has rescinded Note (e) and clarified that material misstatements of fact in, and omissions of material fact from, voting advice remain subject to liability under Rule 14a-9.

Despite the removal of key provisions in the 2020 rules, the SEC staff had previously announced that it would not recommend enforcement action on the matters covered by the 2020 rules, and therefore, these final amendments were not likely to result in a practical difference for companies who had not implemented the 2020 rules. However, on September 28, 2022 a federal judge ruled that the SEC violated the Administrative Procedure Act when it suspended enforcement of the 2020 rules. The ruling will require that the SEC provide a notice-and-comment period for the 2020 rules. We will continue to monitor and provide updates on the final implementation of the proxy voting rules.

The final amendments can be found here.

The substantial implementation exclusion currently allows a company to exclude a shareholder proposal if the company has already substantially implemented the proposal. The amendments would define “substantially implemented” to mean that the company has already implemented the essential elements of the proposal. The amendments maintain the substantial implementation standard, but provides an interpretive framework for its application. The proposing release recognizes that analysis may be required to determine which elements of a proposal are essential, and in turn whether those elements have been addressed. Such determinations would be informed at least in part by a proposal’s degree of specificity as well as its stated primary objectives. In other words, a company may exclude a proposal only if it has implemented all of the essential elements.

The duplication exclusion currently allows a company to exclude a shareholder proposal if the proposal substantially duplicates another proposal submitted to the company by another shareholder that will be included in the company’s proxy materials for the same meeting. The amendments would specify that a proposal substantially duplicates another proposal if it addresses the same subject matter and seeks the same objective by the same means. The amendments would also eliminate the current “first mover advantage” which provides an advantage to the first shareholder to successfully submit a proposal. The amendments would allow the consideration by a company’s shareholders of later received proposals that may be similar to and/or address the same subject matter as an earlier received proposal that seeks different objectives or provides for alternate means of addressing similar matters. The SEC acknowledges in its release that the amendments could potentially lead to a company’s proxy materials containing multiple shareholder proposals with similar issues, leading to greater inconsistency and unpredictability.

The proposed rule can be found here.

The new universal proxy rules for elections became effective August 31, 2022. This means that both companies and activists must include all director nominees on their respective proxy cards. The rules also provide new requirements for all director elections, including uncontested elections. Additionally, the rules require disclosure in the proxy statement about the effect of all voting options provided. A detailed description of the new rules is contained in our previous publication. In response to the new rules, if companies have not done so already, they should take the following steps in preparation for upcoming annual meetings and proxy materials:

The new rules will make engaging in proxy contests easier for both traditional activists and for institutional investors, as shareholders will now be able to vote for nominees among the full slate of competing candidates. For this reason, companies should review: i) director candidates for vulnerabilities, such as attendance, board tenure, diversity, and other criteria flagged by key institutional investors and proxy advisory firms; ii) opportunities to enhance and highlight the presentation in proxy statements of director candidate qualifications; iii) the scope of the company’s efforts to engage with shareholders; and iv) strategies for communicating with proxy advisors.

Companies may want to update their bylaws (i.e, codes of regulations for Ohio corporations) in response to the new rules. For example, amendments to bylaws can require an activist shareholder to confirm its compliance with new Rule 14a-19 on the company’s request and confirm that the company will disregard proxies solicited by the activist shareholder if it fails to comply with the rule. Updates to the bylaws could also require delivery of appropriate solicitation materials to shareholders by nominating persons, require nominating persons to disclose certain information mandated under the advance bylaws and the new SEC rules about anyone with whom it is working with, and also could require the nominating person to provide to the company reasonable evidence of compliance with the new SEC rules and bylaws.

The SEC recently issued interpretive guidance relating to the universal proxy in CDI 139.01, CDI 139.02, and CDI 139.03. In CDI 139.01 SEC staff clarified the process for a dissident shareholder to submit additional or alternate nominees in its Rule 14a-19(b) notice. CDI 139.02 explains what a company should do in a situation where multiple dissident shareholders separately submit slates of nominees. CDI 139.03 will need to be considered by all companies, and relates to how companies disclose universal proxy deadlines in their 2022 proxy statements.

The SEC staff confirmed in CDI 139.01 that an activist’s notice may only contain the names of nominees for whom it intends to solicit proxies. The SEC will not object to activists listing the names of additional or alternate nominees, so long as the notice clearly identifies they are presented as additional or alternate members and comply with charter documents and state law.

The SEC staff provides in CDI 139.02 that where more than one activist is intending to present a slate of director nominees, the company must inform each activist of the names of any other persons nominated by other activists who also provided a Rule 14a-19(b) notice by the deadline prescribed in Rule 14a-19(d).

The entire Compliance and Disclosure Interpretations can be found here.

The final rule can be found here. 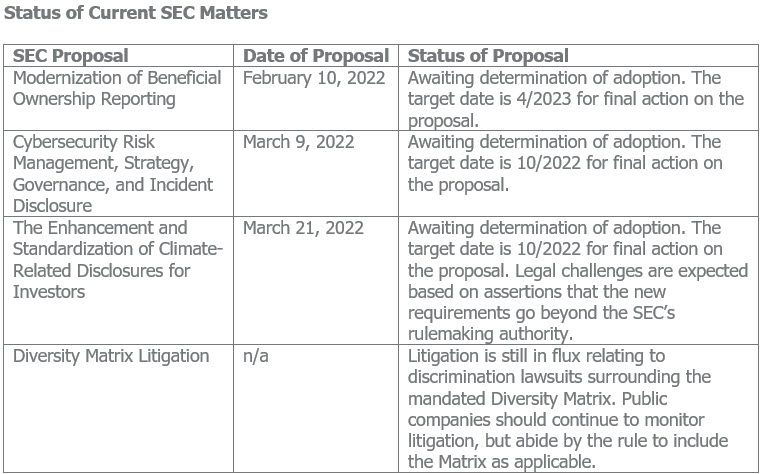 To see all proposed rules for 2022 see here.

To see all final rules implemented in 2022 see here.

Below is a link to our third quarter 2022 corporate and securities law blog posted on kmklaw.com.