The State of Ohio Board of Pharmacy just released its draft dispensary districts. As you’ve probably heard, medical cannabis is roughly a year away from becoming reality in Ohio, and this step provides some initial insight into where a patient might be able to obtain medical cannabis with a physician’s prescription. Of note, it has been proposed that Hamilton County receive 3 dispensaries; Butler County 2; with Warren and Clermont counties receiving one each. A map showing the proposed dispensary breakdown of the entire Southwest District is pasted below. 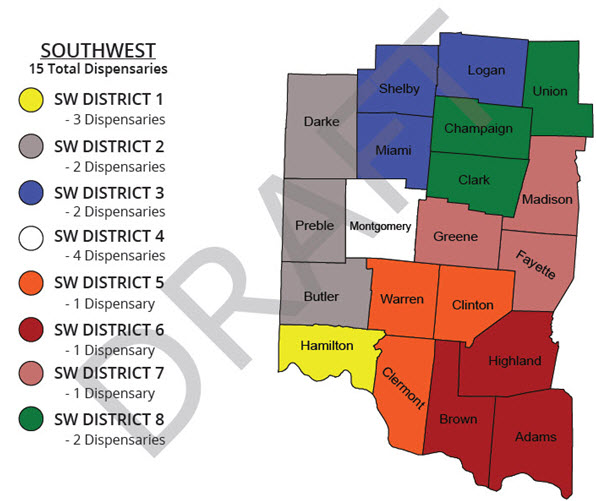 Of course, this doesn’t mean we know where dispensaries will be located; rather, only where they could be located. For example, you may recall the City of Blue Ash passed an ordinance in May to prohibit the cultivation, processing, or retail dispensing of medical cannabis. So, even though Blue Ash is located in Hamilton County, local residents will have to look elsewhere to fill a medical cannabis prescription. Conversely, the City of Cincinnati late last month unanimously approved the cultivation of medical cannabis in existing manufacturing districts, a decision which clears the way for cannabis to be grown, though not necessarily sold, within the city limits. A decision whether dispensaries can be located within the city is yet to come.

What does all this have to do with “intellectual property” and this blog? Glad you asked. More on that a bit later…

Possession and distribution of marijuana for any purpose is illegal under federal law. KMK can only advise clients regarding compliance with Ohio state law on medical cannabis, specifically, Sub H.B. 523 of the 131st General Assembly.